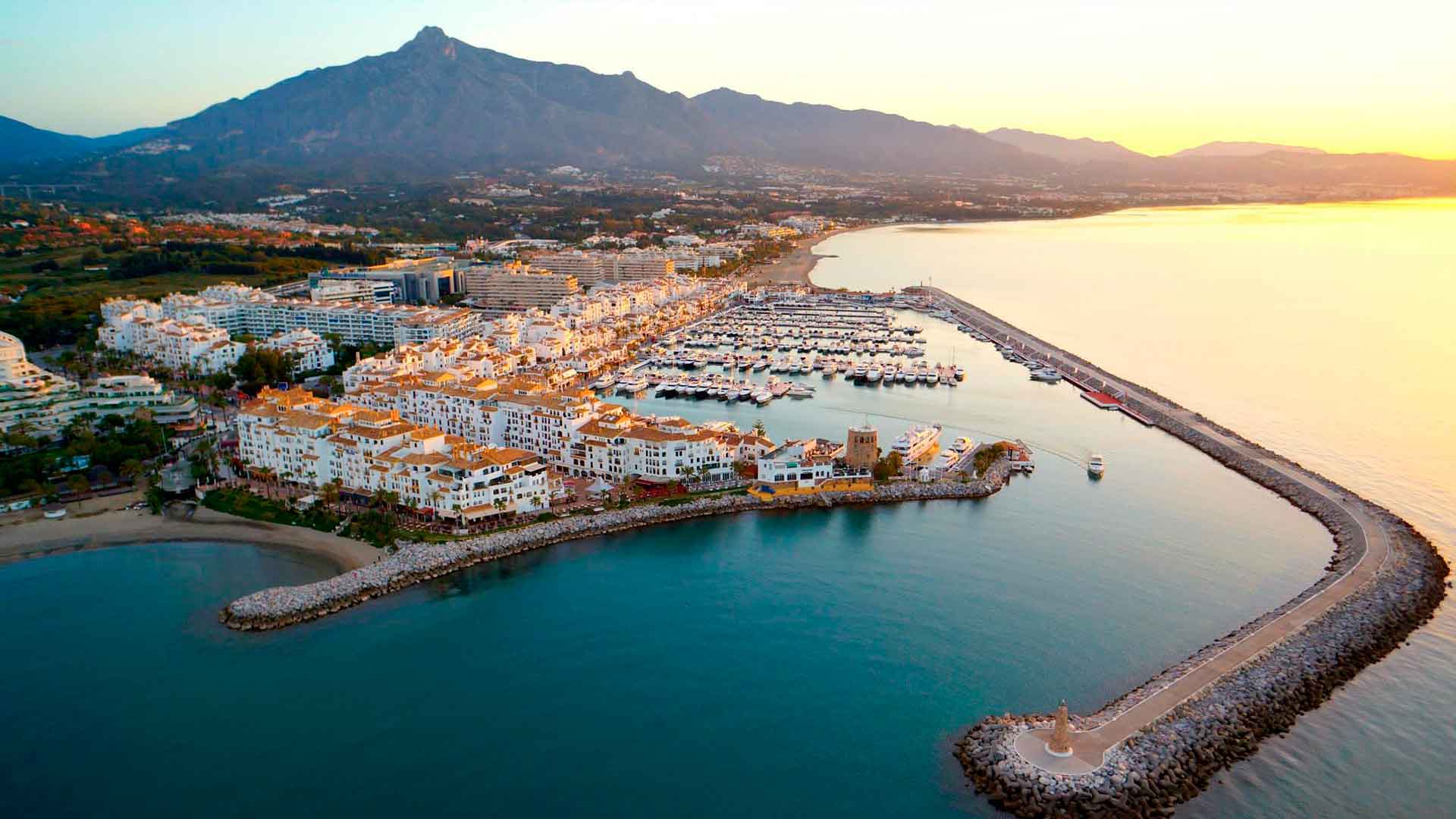 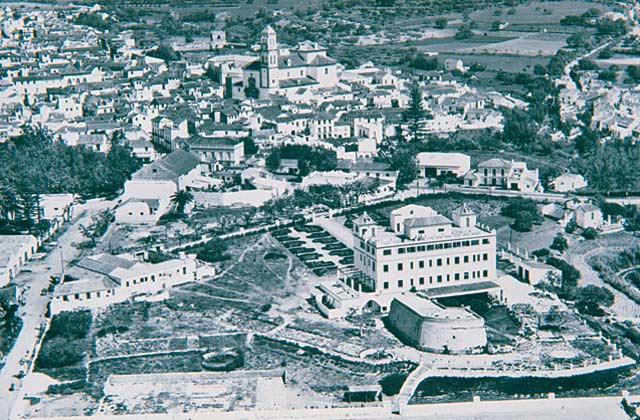 The history of the city:

Marbella’s history began in approximately 1600 BC when it was conquered by the Romans who named the city Salduba, which means Salt City. However, scientists have found remains that the area has been inhabited since the Palaeolithic and Phoenician eras. 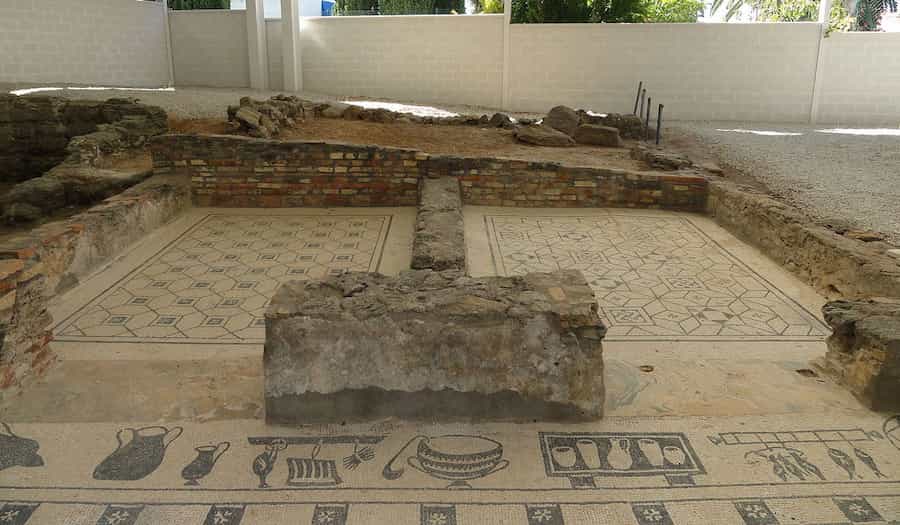 In the 6th century Arabs arrived in southern Spain bringing Islamic rule and changing the name of the town to Marbil-la. A fortress and a defence wall was built with only three access points to protect them from Christian attacks. Marbella was ruled by Arabs for nearly 9 centuries which is still evident today by its Moorish architecture in various parts of the city.

In 1485 Marbella was conquered by the Spanish Catholic Monarchs led by King Fernando, who forced the defeated caliph Mohamed Abuenza to turn over the keys of Marbella. In the centuries to come Marbella history as well as the town went through dramatic changes. The original Muslim Medina in the current Old Town was destroyed in order to open up a new square, which today is called Plaza de los Naranjos, or Orange Square.

After this, Marbella history continued to develop, however slowly. The city grew as a farming and agricultural society as well as joining the industrial movement with the founding of the first iron foundry in Spain to install blast furnaces. Buildings, bridges and roads began to crop up during the 19th century adapting to the growing industrial needs making Marbella the second most important industrial province on the peninsula. 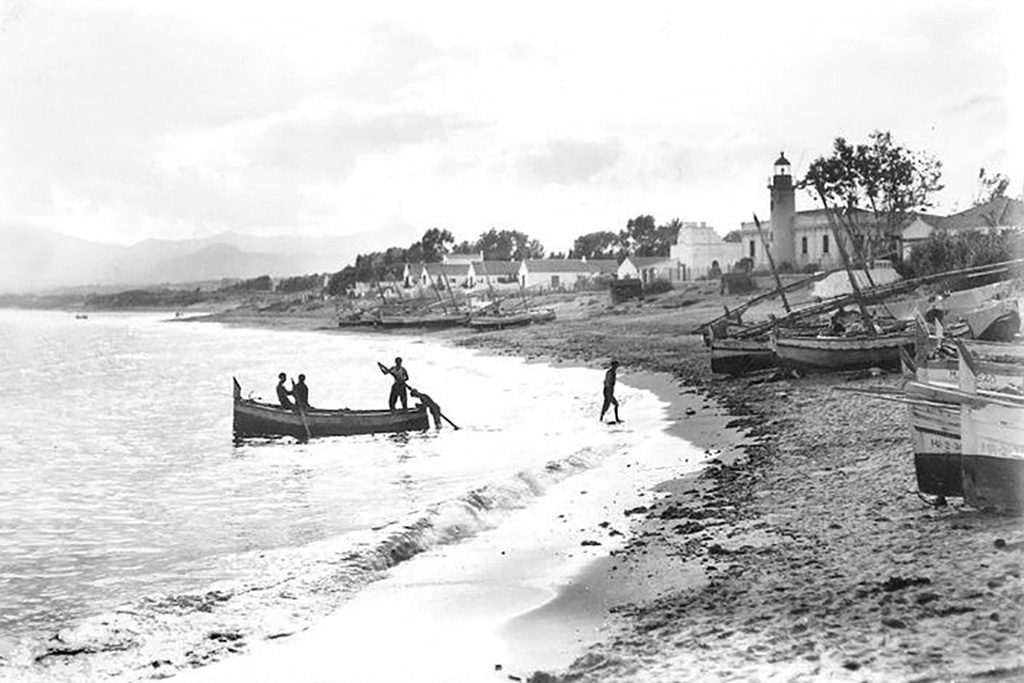 Marbella as of today:

Throughout the 19th century Marbella remained a small agricultural town of only 10,000 inhabitants until the 1940s when Prince Alfonso de Hohenlohe landed in Marbella as a result of a problem with his Rolls Royce. This is where Marbella history takes an interesting turn.

The Prince was so enchanted with the city that he decided to buy land for commercial purposes building hotels and apartment complexes. Having aristocratic roots and kinship to the royal courts of Europe, Price Hohenlohe quickly convinced Europe’s ruling elite to vacation in this new hot spot in casual yet discreet luxury.

The 90’s welcomed the mayor of Marbella Jesus Gil, a builder and president of the soccer club Atletico Madrid, who continued to develop the city in new directions improving its infrastructure, sports arenas, cultural centres, municipal offices, parks, golf courses and more.

The jet set and famous continue to flock to Marbella’s warm weather and cool beaches. 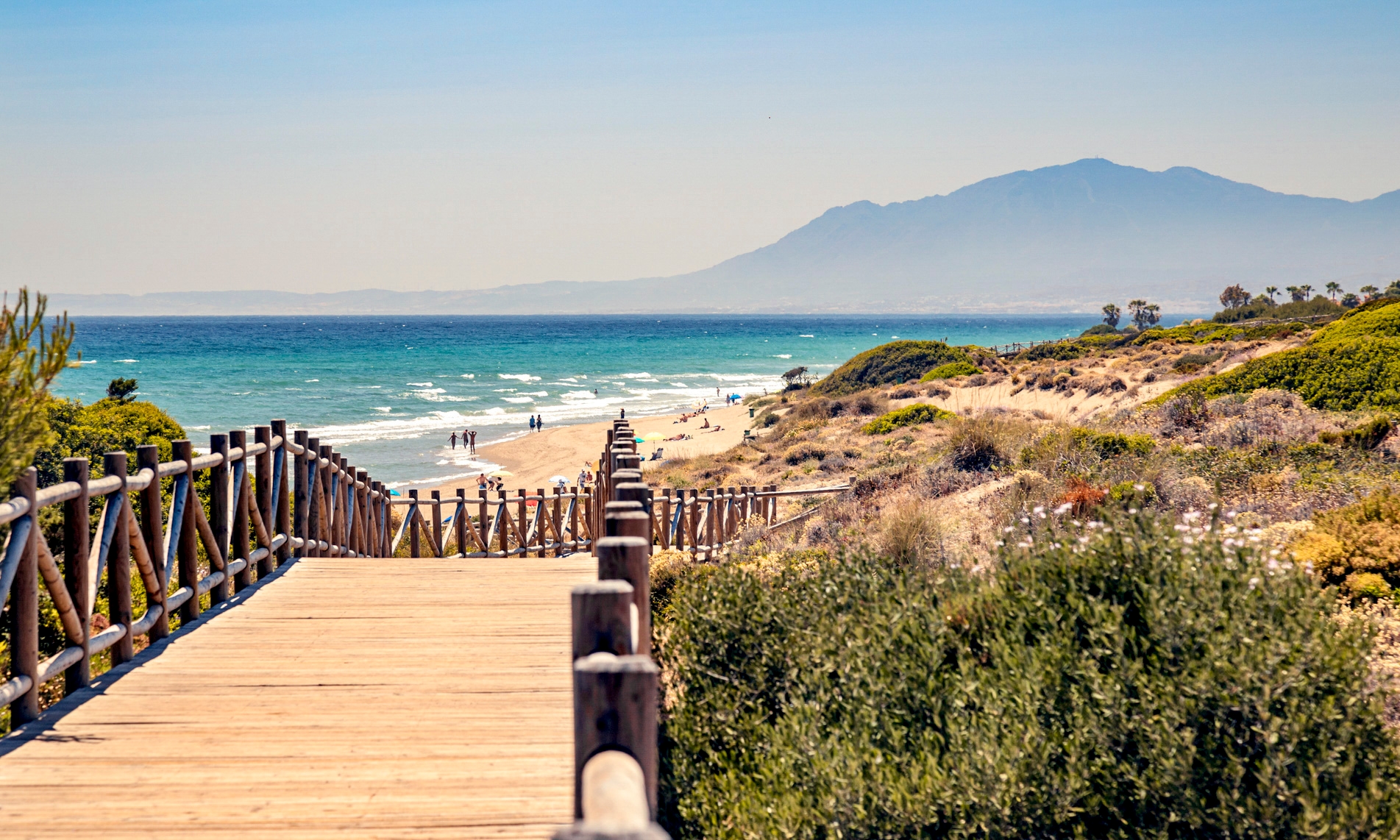 This beach is situated in the heart of Marbella, facing the promenade and to the west heading towards Estepona. It is therefore one of the most central beaches of Marbella, with high occupancy and much popularity due to its location. The beach has everything you could wish for. Lots of bars, restaurants and activities. There are also public facilities such as showers, toilets and bathrooms. 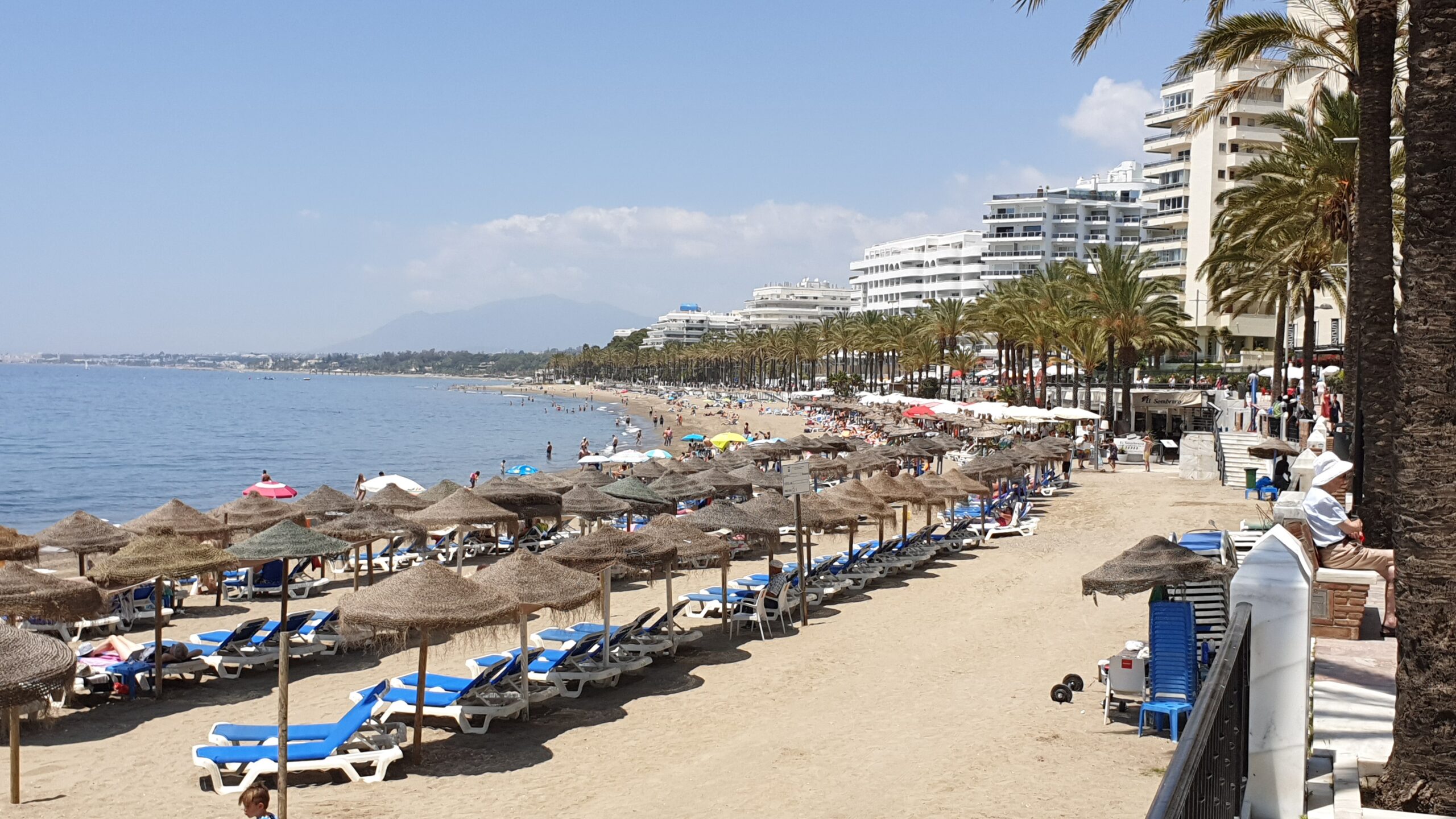 Casco Antiguo as it’s known in Spain, the Old Town is a true gem in Marbella and provides such a contrast with the flashy beach clubs and holiday resorts. It maintains the charm of an old village but at the same time, it’s a popular tourist hot spot so you will always find it crowded in the season. It’s home to charming restaurants, quirky boutiques, ice cream and churro shops and Orange Square. Its cobbled narrow streets will lead you through a wonderland of charming corners, beautifully decorated crumbling old walls and gorgeous sights everywhere you go.

Marbella Old town is by no means big, so you will only need an afternoon or one day to explore it all. 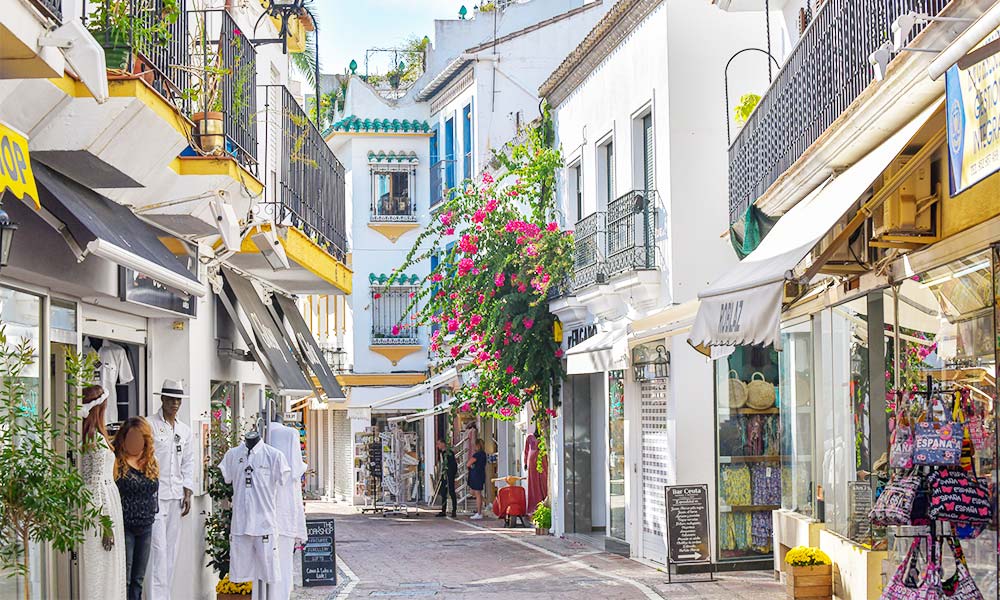 Plaza de Los Naranjos, situated in the heart of the Marbella old town, is the liveliest place in town and one that you can’t miss on your visit.

It perfectly captures the spirit of the old town, even though at times it can feel very touristy and busy. As you would expect for such a hotspot, it’s home to overpriced restaurants and in the summer months, it’s predictably overcrowded. So much so that it’s almost hard to navigate through the narrow roads.

Despite the above, it still has the feel of an old village square where elders gather to discuss the latest gossip and locals meet for Sunday feats of churros.

The Orange square is home to Marbella’s Town Hall and a great starting point for exploring the old town in Marbella. 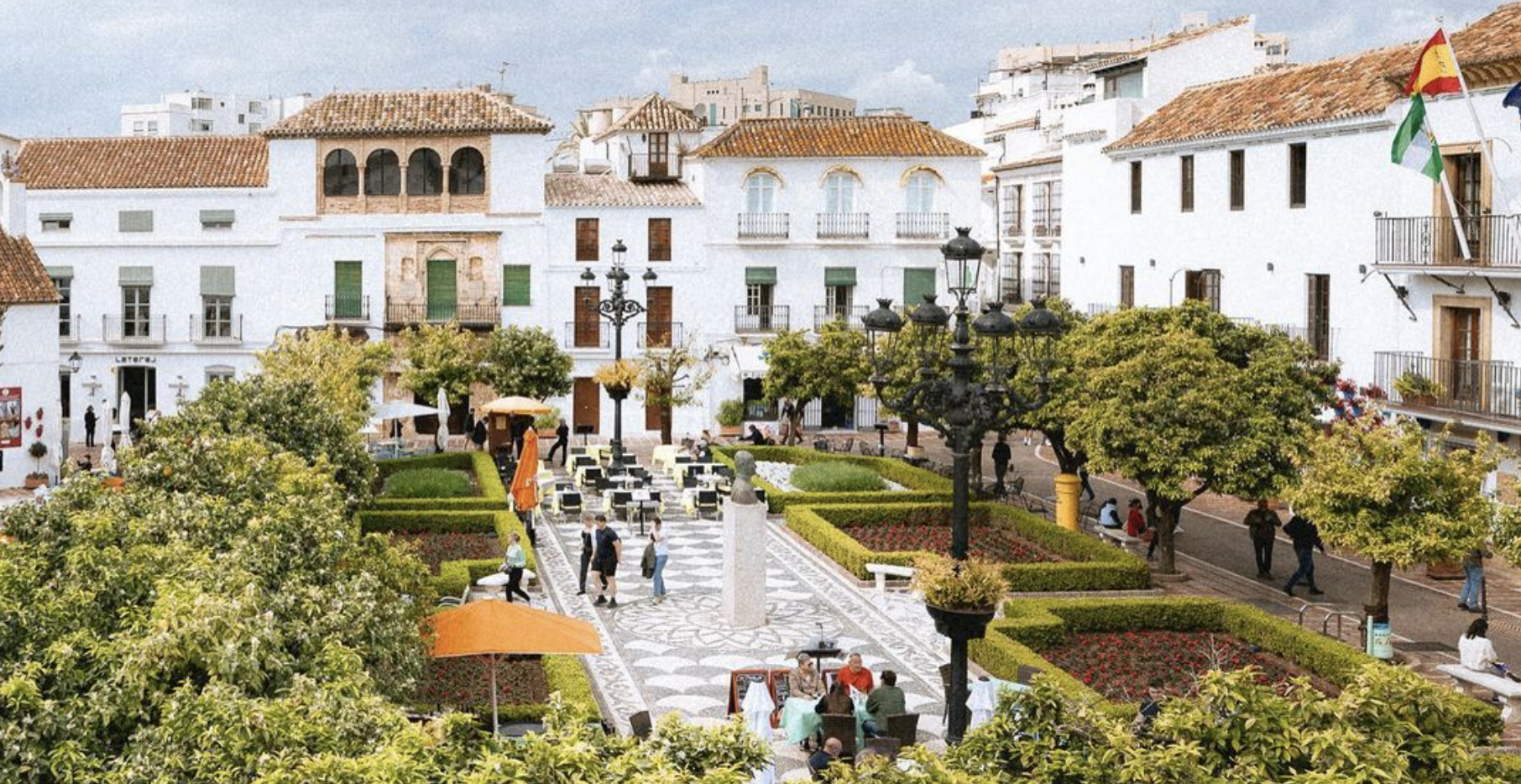 The Alameda park is situated between the seafront and the old quarter. The park dates back to the 18th century and in the current state it’s only a fraction of its original size (20.000 square metres). It’s a popular meeting spot for locals and visitors, and features some beautiful botanical species. The park splits into two large promenades that meet in the middle where you’ll find a large fountain (Fuente Virgen de Rocio), along with lined pathways on each side. Around the park you’ll find lots of stone benches with beautifully decorated tiles. There are no shops or cafes in the park but at the corner you will find a lovely bakery and nearby there are a few restaurants. 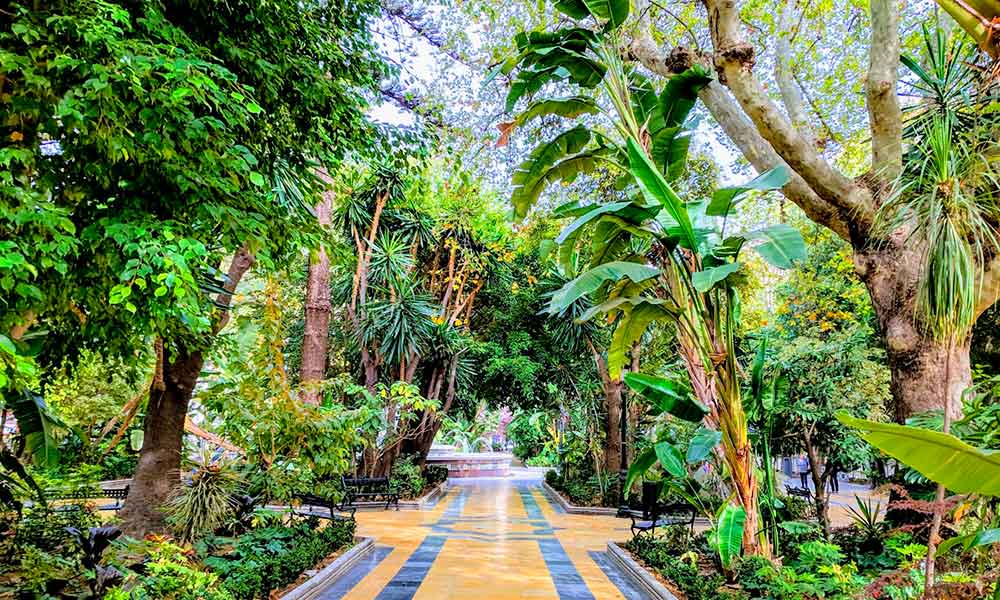 Starlite Catalana Occidente is the best boutique festival in Europe. After nine editions, it is the longest-lasting festival with more than 50 days of concerts. Music, culture and gastronomy coexist in a single space. A great venue for those who want to enjoy close and intimate concerts in an incomparable place. Its programming includes options for all audiences, ages and musical tastes. Artists such as Enrique Iglesias, Elton John, Lionel Richie, Maluma, Anastacia, Jessie J and Ricky Martin have played their music at Starlite Catalana Occidente offering unforgettable evenings. Starlite Catalana Occidente is not just music. The experience begins before the concert with its gastronomic offer in a summer terrace environment, and continues after the show with DJ sets to enjoy in a unique environment.

The festival runs from June to September and the tickets can be bought on the official website. 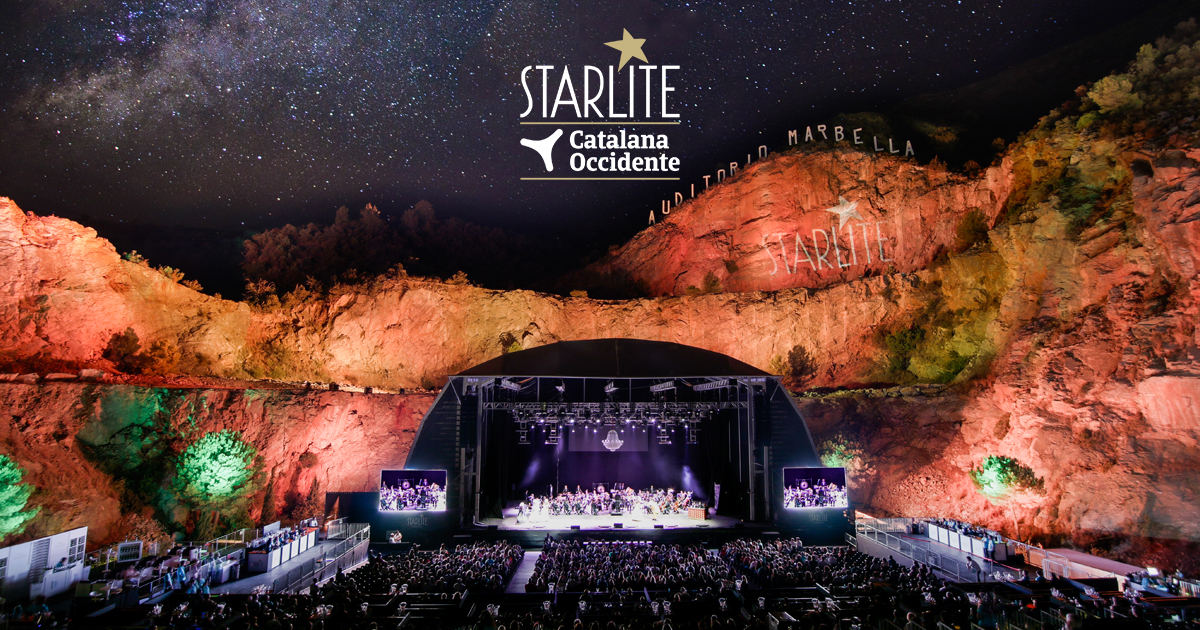 Puerto Banús, is a marina located in the area of Nueva Andalucía, to the southwest of Marbella. It was built in May 1970 by José Banús, a local property developer, as a luxury marina and shopping complex. It has since become one of the largest entertainment centres in the Costa del Sol, with 5 million annual visitors, and is popular with international celebrities. Developed around a coastal village in the Mediterranean architectural style, Puerto Banús contains high-end shopping malls, restaurants and bars around the marina. 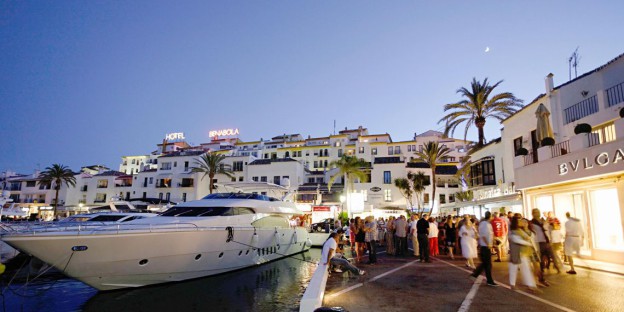 ROSAS is a completely unique concept in which healthy cooking is able to satisfy even the sweet tooth. Regardless of whether you want to savour the most exquisite French pastries or enjoy a quinoa salad, ROSAS will offer it to you with pleasure.

This spot is famous for its great service and friendly staff that is always ready to help you. Also, clients recommend this cafeteria because of reasonable prices. The nice decor and enjoyable atmosphere let guests feel relaxed here. 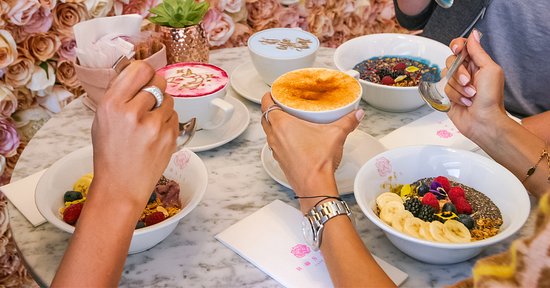 Breathe offers more than just great food – it’s a stylish but trendy restaurant (and bakery and cocktail bar) that offers efficient, friendly service and a multifaceted fresh-thinking approach to gastronomy. The main dining room is the most formal part of the restaurant, a stylish area with a trendy urban feel that connects with its own panoramic terrace with fantastic views of Marbella, Puerto Banús and La Concha Mountain. The restaurant looks after all its customers, including vegetarians, vegans and people with special dietary requirements.

The Café & Bakery is located on the ground floor – easily accessible and connected with its surroundings yet a relaxed spot sheltered from noise and traffic where you can meet up, enjoy breakfast and get the day started in a delicious but also healthy way. It’s located on a popular junction, but rather uniquely we have secure on-site parking, so it’s easy to pop in whenever you feel like it. 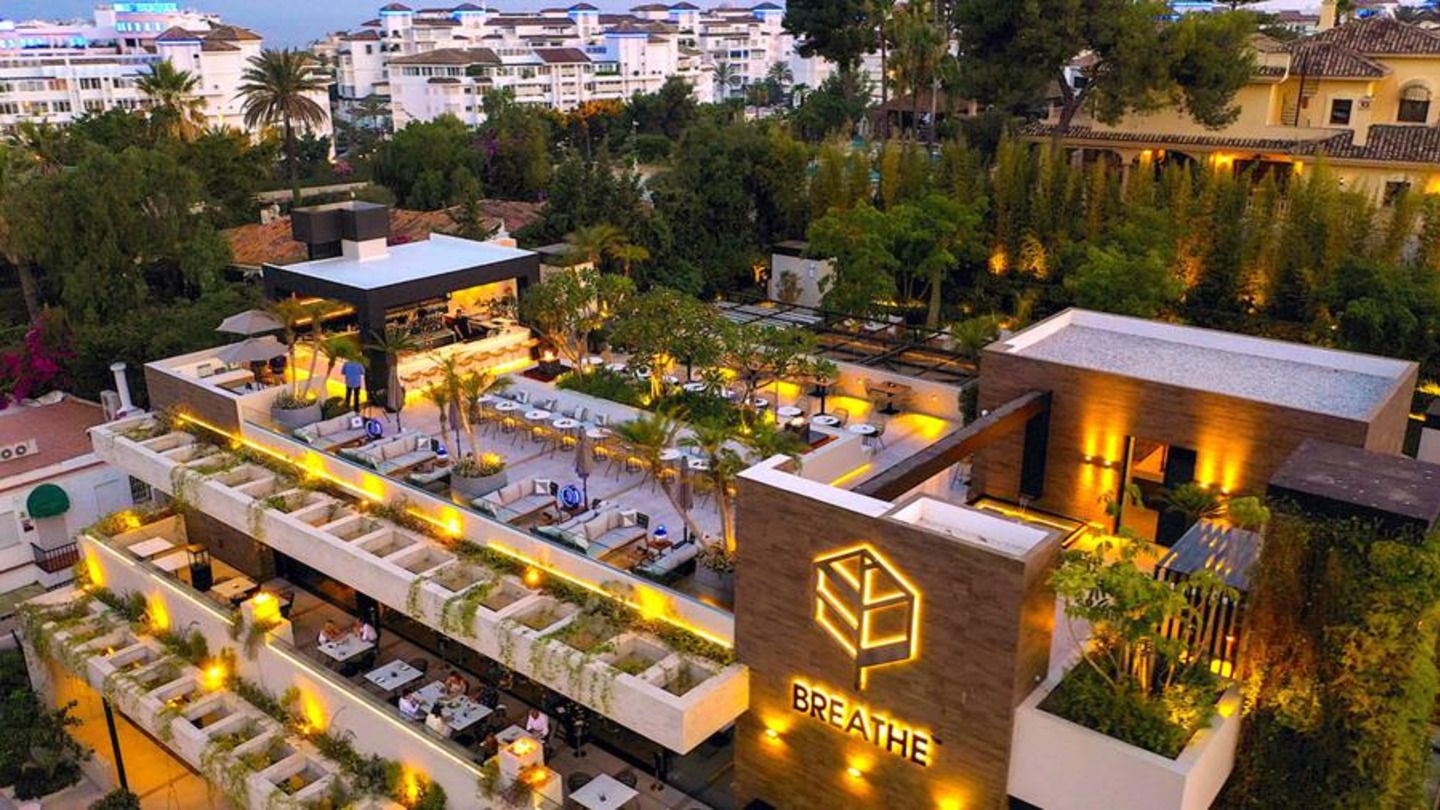 Located near to the famous Puerto Banús marina, La Sala is the only restaurant in Marbella that offers live music from renowned musicians, singers and DJs seven days a week and all day on Sundays. The restaurant is a convenient meeting place for those heading out to Puerto Banus complex, but also a first class venue in its own right with reasonable prices. It has several different menus throughout the day and night including a set menu and kids’ menu. There’s an outside seating area on the terrace and sophisticated indoor dining area. Perfect pre-bar before heading to La Sala Aqwa Mist, the club located in the same building.

With beautifully prepared meals from market fresh ingredients, service with an unconditional level of care, cocktails at the cutting edge of mixology and a constantly evolving wine list, The Beach House is a great place to enjoy an exceptional meal.

Fine dining? Sunset cocktails? Luxury beach beds? Awesome live performances? They have it all and more.

This restaurant is located right on the beach in Marbella and is very popular. It is therefore ideal to book in advance. 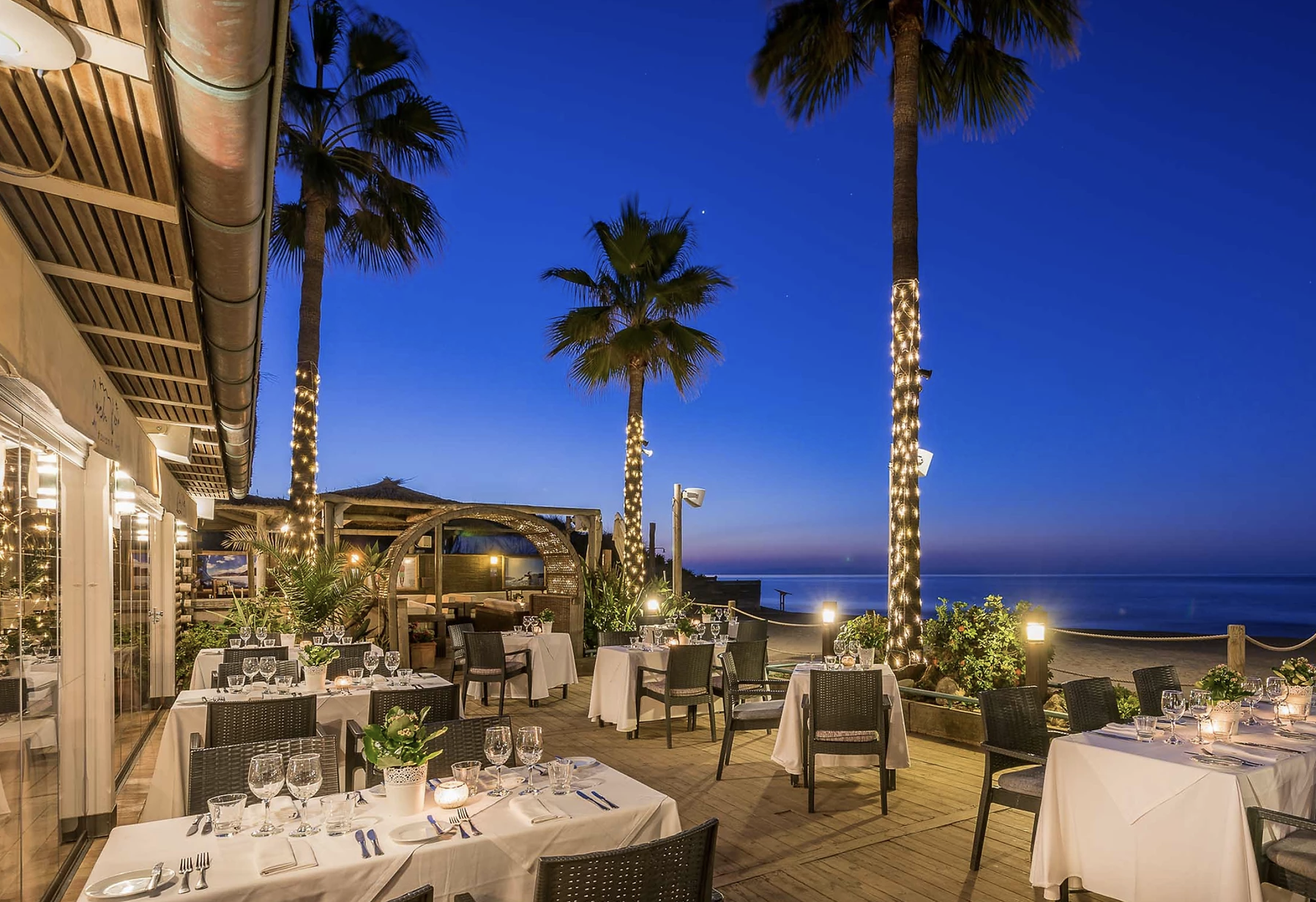 The Harbour Bar & Restaurant Marbella is an elegant and friendly restaurant located on the first floor of the Real Club Maritimo, open to the public 7 days a week, in the marina of Marbella, with stunning views and a fresh vibrant atmosphere. At the restaurant you can enjoy delicious food inspired by travellers from around the world, from sunrise to sunset.

It is possible to host an anniversary, a wedding or a birthday party here. The professional staff reflects the style and character of the restaurant. 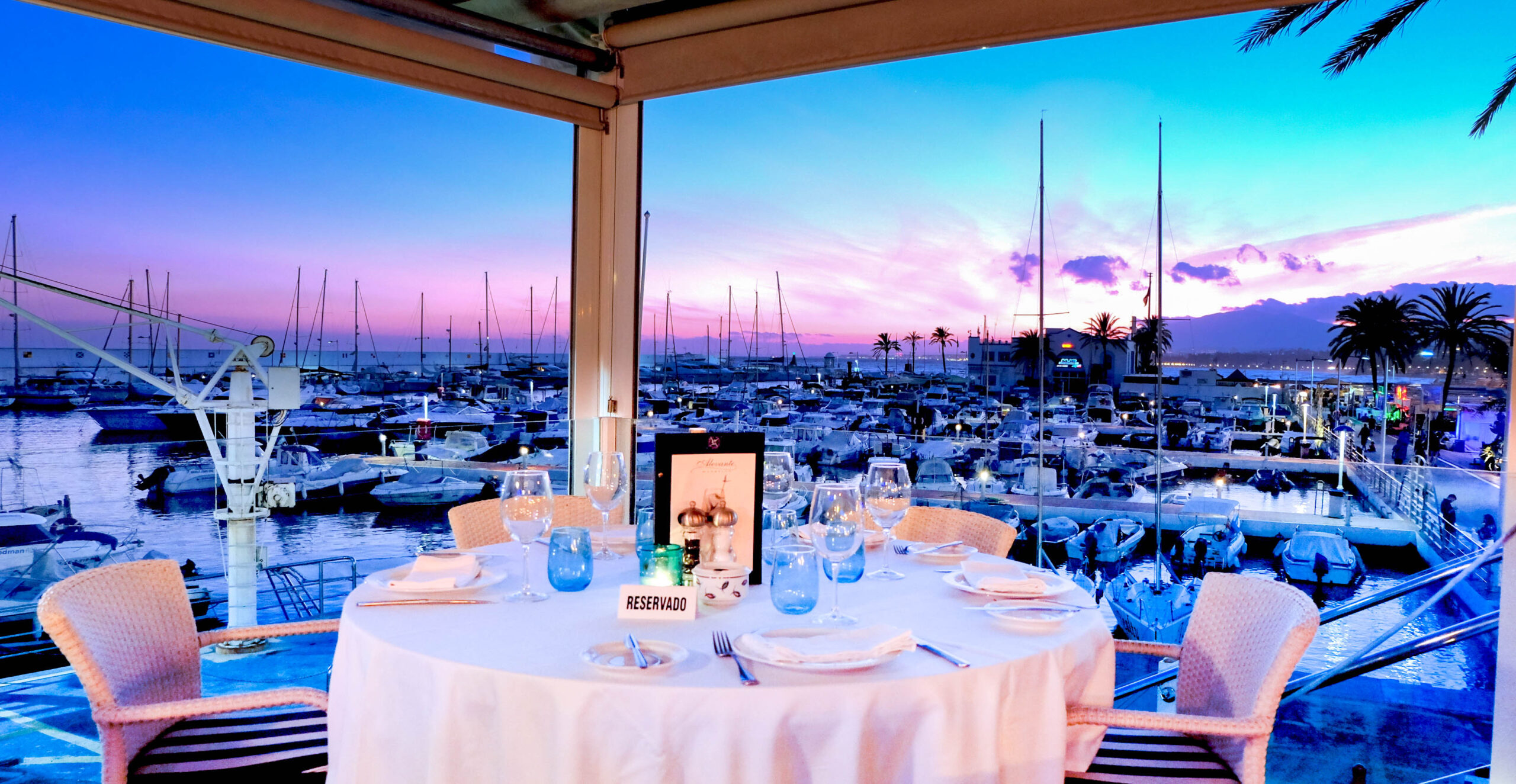 Marbella reached historic sales peaks in the high-end market in 2021 and this trend has continued into 2022, increasing by the month. In recent years Marbella has undergone a significant transformation. The combination of technological advances and being able to work from home most of the time has gradually helped Marbella evolve into the home for numerous families, mostly from Northern Europe, who have migrated to the Costa del Sol. Marbella has become one of the fastest-growing and most sought-after luxury destinations in Europe, which is set to remain this way for the foreseeable future.

The table above shows property sales made in 2021 in the three municipalities comprising the “Golden Triangle” of Marbella-Estepona- Benahavís, which is for all practical purposes, one market area. These statistics show all sales, not just those in the luxury end of the market. The market demand in 2021 represents an incredible increase of 30.15% of sales over the pre-pandemic year of 2019. It should be noted however that the sales figures in the Marbella area even in the pandemic year of 2020 were nonetheless surprisingly strong.

Arguably Southern Europe’s most exclusive urbanisation, La Zagaleta in Benahavis reported a record year in 2021 tripling the volume of sales of the previous two years and enjoyed the best start of a year in their history during the first quarter of 2022. Meanwhile, the prices per square metre achieved in several sales of apartments and penthouses in the iconic beachside Puente Romano Resort have resulted in historic highs, some cases reaching in excess of 30,000€/m2.

This surge in demand and the subsequent depletion of key-ready stocks in Marbella areas such as Nueva Andalucia, Sierra Blanca, La Zagaleta and most parts of Marbella’s Golden Mile, has not only resulted in a rise in property prices in these areas, but produced a spike in demand for high-end, key-ready homes in surrounding neighbourhoods, mostly within the municipalities of Benahavis, Estepona and to the east of Marbella. 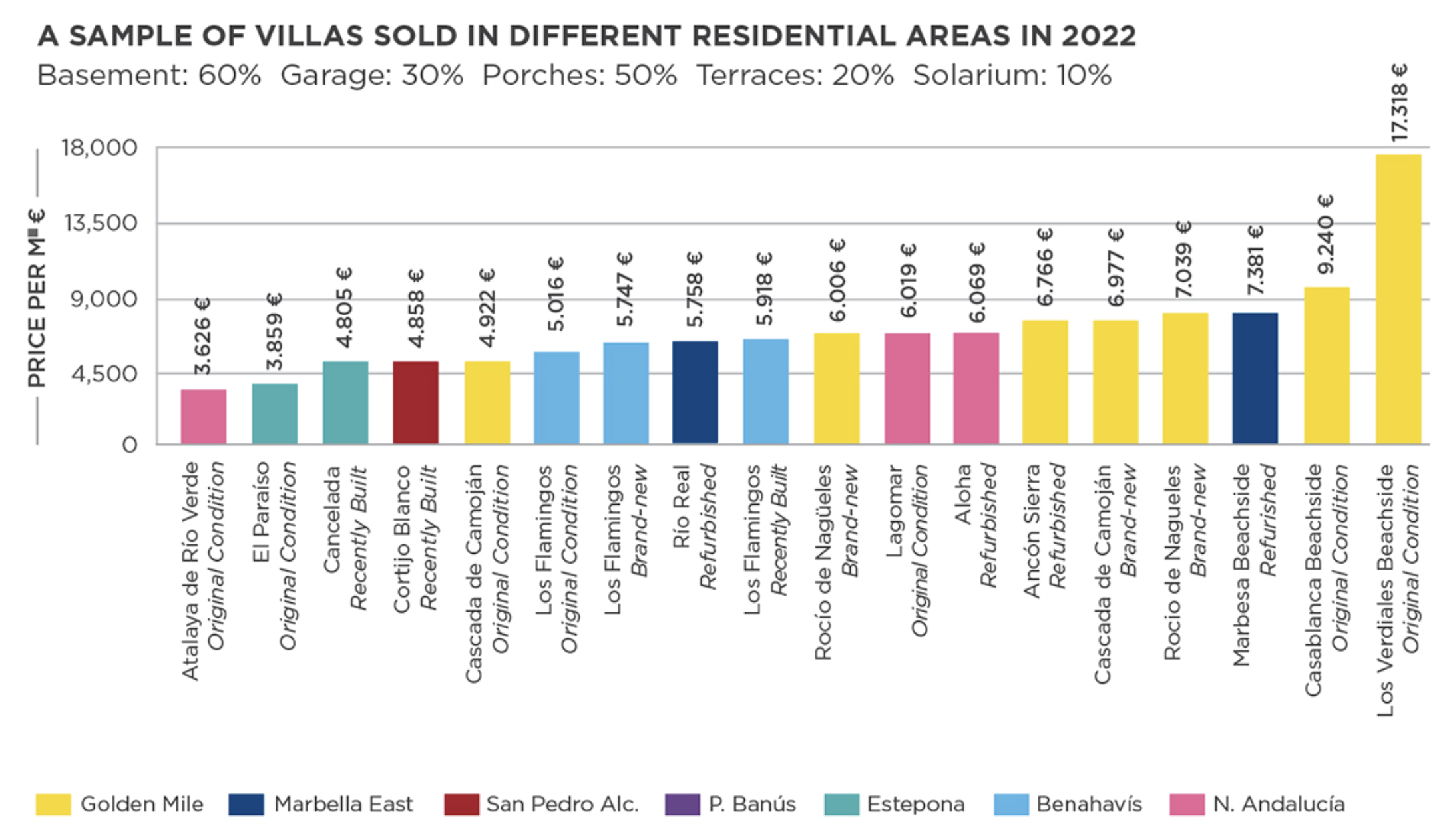 It is well known that the buyers of high-end luxury properties in the Marbella area are 85% to 90% foreign buyers.

In the Málaga province, the top three foreign nationalities of property buyers in 2021 were: